I was hanging with some ham buddies last weekend and we got to talking about the diversity thread in PowerSDR's development My set up is 2 verticals separated by about 200ft. On 160 its not even a half wave, on 80M its not a wavelength, on 40 it's about a wavelength and a half and on 20 its about 3 wavelengths. Most of my testing has been on 40M, though I have tested on 160 through 20. As the antennas become more distant (in terms of wavelengths) the ability to improve reception increases. On 160 I don't really see diversity though I am to some extent able to notch noise.

Today I was playing around on 20. On 20M I have what amounts to a pair of 5/8 wave end fed verticals Here is a shot of an Argntine station, a LU9 calling CQ. Notice how weak he is, and nearly buried in the noise.

Notice how the panadapter of the first receiver is different than the panadapter of the second. The software has been modified so that tuning the diversity changes panadapter-1 and S-meter 1 relative to panadapter-2. If you look at Skimmer you can see the noise. The upper part of Skimmer is nice and dark blue, while the lower part is salted with white. The white represents the broad band noise that is seen in the panadapter. (The output for skimmer is picked off from the signal stream before the steered diversity controls in the software are implamented so adjusting steering does not effect the noise signal in skimmer)

Here is a closer shot of the 2 signals with the diversity steering feature turned on: 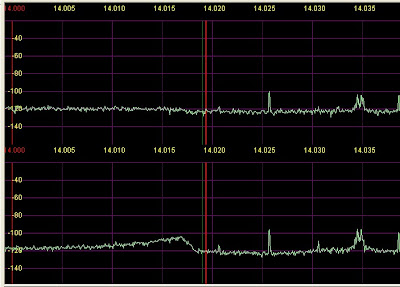 Diversity Steering ON
You can clearly see the big noise ramp on RX 1 is gone. Here is a shot with the radio in normal non-steered diversity mode: 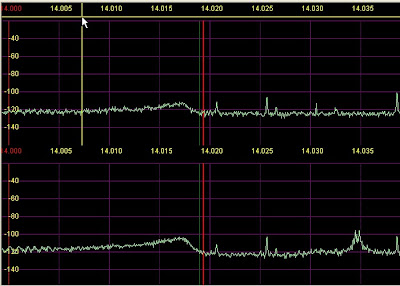 Diversity Steering OFF
The notch is present on both receivers but you can see the strength on the upper panadapter (1st RX) is a bit less than on the lower panadapter (2nd RX) So you can see in this shot what a normal diversity RX would deliver vs what the F5K delivers with diversity steering.

If you study the 2 pics you can also see the signal at 14.025 is not attenuated in fact is it slightly peaked in the steering on shot compared to the steering off shot. You can also see normal (non-steered) diversity displayed if you look at the broad signal at 14.035. On the upper trace it is not present and on the lower trace it is present. This selective independent fading is the payoff of normal diversity: one signal is present for receiving even when the other is down in the mud.

Here is a audio clip of the LU9 station. The clip starts out with steering on, turns steering off, (you can hear the background noise rise) turns steering on (LU9 pops out of the noise) and steering off. With steering off you get the normal advantage of diversity but with steering you get help against fading as well as noise notching. You have to adjust the bulls-eye to give you best readability but once you get used to playing with this it doesn't take long to make signals other wise unreadable quite Q5. (Note the bandwidth setting of the radio is 25hz which helps reduce the noise considerably as well)

I'm not sure but I think some of my buddies are starting to get interested in The F5K/PowerSDR combo. To my knowledge no other RX in ham radio has this amazing feature

The interesting thing is how poorly understood this technology is and how you have to wrap your mind around concepts that all of us have but are not well understood, because the concepts are presented in a novel way. I would love to put this system on a pair of beams that are separate enough to achieve diversity, I especially would like to try a pair of receiving 4 squares on 160 and 80. I bet the result would be simply astounding. Unfortunately I don't have that kind of real estate.

DRM is a modulation scheme that is a digital signal that can contain a variety of data including audio and text. The Wikipedia entry gives a good description. I had DRM running on my SDR-1000 several years ago, and basically had forgotten it. With all the interest I decided to see just how easy it would be to set up DRM on my F5K. What I discovered is that it is trivial

I installed the .zip file into a folder and started the DRM decoder 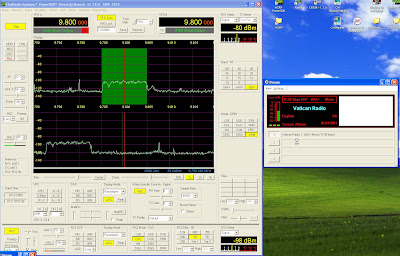 Finally I found a program guide of DRM stations and tuned in Vatican Radio ata 9800 in the 31M shortwave band. The F5K has a mode devoted to the DRM mode. As soon as I tuned in the station I started decoding

Here is an example of the raw audio from the F5K headphones and here is the audio output in my computer speakers. The audio quality is virtually like FM radio with no fading at all

I have read on the flex list you can also use the F5K as a experimental DRM transmitter using a DRM encoder, but I haven't really investigated that at all.

So if you have a Flex download the decoder and have a blast!!!