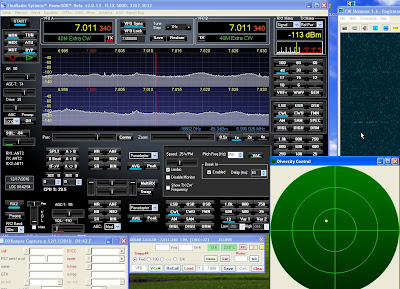 Its been a while since I checked in here. My schedule has changed and we are in the process of getting a new practice off the ground so I have not been as devoted to my hamming as I was in the past. I was awakened by some alarm in my house probably my kids clock or something. It was going off every 10 minutes so I got up to investigate. Of course as soon as I got up it never happened again, but it did get me into the shack.

This morning as I was tuning 40M, I realized the whole world seemed to be open I was hearing the terminator come across EU as those folks were waking up, and I was equally hearing Asia as those folks were heading into the dark. I was also hearing South America and Russia. In fact it was interesting as some of the EU stations were calling CQ directly on top of some of the Asian stations,. Eventually some of them hooked up. My line noise has finally disappeared and I was able to hear all this with my noise blankers turned off for once. The ambient noise is higher than I am used to by an S unit, but virtually no static was to be heard. The F5K has a very quiet receiver and is easy on the ears for extended periods of listening to the band noise trying to dig out those coherent beeps.

This is the time of year I like best for hamming. It reminds me of days gone by when its cold outside. The sky is very dark and the heavens are full of stars bright. I would come flip on the radio and hear what I could hear slowly tuning from bottom and up. The bands are quiet but unfortunately not too many stations are out there it seems 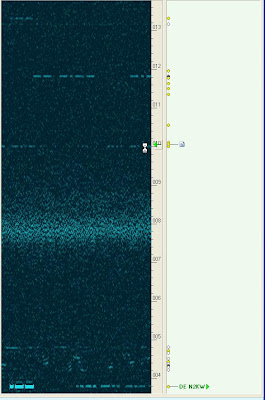 As you can see skimmer is virtually empty. I didn't hear anything exotic but I just had a good time beating the bushes. I think there are probably more of us just waiting to pounce than calling CQ. Stations heard ZL VK SM F UA BA JA HK BY KP4 SM SP G EI Like I said the whole world